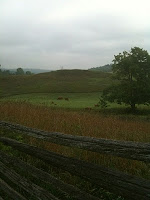 So, the cows are doing marvellously, and our learning curve has been steep. Surprisingly, cattle dont' take that much to care for. Aside from a vet bill for some Ivermec (which we later discovered we could have purchased at the TSC Store and applied ourselves) and the evening grain ration - they mostly keep to themselves and pasture amongst the rolling hills.

I joke that we got them only to improve the view.
The Highlands are very docile, and while it took me a few weeks to get used to their horns, I have become accostomed to them. I do use a "sherpherd stick" when I am in with the herd, but tend to use it more as they use their horns. To say "out of the way please" or "back off, I am not giving you any of this". They seem to respect my "horns", even though they are in the form of an old maple branch with a knotty end.
When we went to the feed store to ask for "cattle feed", everyone had a good chuckle. Which was fine, because we laughed too. They were very helpful, and we not give a mix each night of grains and corn screenings, with a little diatomaceous earth mixed in for good measure.
I can stand down by the barns and whistle, and all 8 cattle come running like dogs over the hill. Actually, they are better trained than the dogs, as when I whistle for the dogs they tend to run the opposite way.
I am still not sure if they were a good purchase, but as a starter herd for two city kids who are trying their hand at farming, they are a perfect breed. Whether we keep them or not remains to be seen.
Now...I think we need some chickens. Since the no animal rule has been broken, what's the harm?
Posted by Girl at 8:15 PM