Sourdough is amazing stuff. I call mine Fred, and he lives in the fridge - way at the back behind the pickles.

Fred gets fed weekly, he isn't picky. A little flour and water, a dash of sugar and he's happy. But the trouble is that Fred likes to be used weekly. Why is that a trouble you ask?

Sourdough is delicious, it should be simple to keep using it up. And it is, but we are adrift in a sea of cinnamon buns and pumpkin loaf. My freezer is over flowing with sourdough creations. I have begun giving it away, and my 80something year old neighbours reminded me that they can't eat sugar...so now who do I give it to?

My colleagues are requesting that I stop with the cinnamon buns, their waistlines can't keep up. But neither can mine.

Fred will die if I don't use him.

Sometimes, I get lucky and can find some poor sod, aka a friend, to pawn sourdough off on. "Here! Take a few cups! It's awesome stuff." - and later they curse me for including them in this sick cycle of baking.

I could make bread, but my low carb diet doesn't need any encouraging in the wrong direction.

It's Friday, time to make something with Fred. Sigh...is it murder to let him pass on? The guilt would kill me. Time to make cinnamon buns... again!
Posted by Girl at 6:43 PM No comments:

So it appears that I have been happily blogging away on my iphone, and the endless blathering didn't go anywhere. I am learning that the "Free" iphone apps are free for a reason. So bear with me dear reader, as I load up posts from some time ago.

On the plus side, I can now add some photos to the posts and make your journey with me more colourful.
Posted by Girl at 3:21 PM No comments:

It pays sometimes to be a "Hick"

It's not often I get into the "big city", but recently a conference at a downtown Marriott Hotel caused me to make the trip into the endless sea of smog.

I arrived in the cement jungle at about 6AM, early enough to beat the mad dash of commuters and the streams of pedestrians that seem to ignore every traffic signal.

Following the conference, I inched my way into mid-day traffic for the trek home. It was madness, trucks were double parked, pedestrians jay walked at every gap within the park cars, cyclists couldn't decide if they were cars or pedestrians and opted instead to leap from sidewalk to road at a moments notice.

I came to a one way street, and it beckoned me with it's promise of directional traffic. So I cautiously made the turn, narrowly avoiding the eldery gentleman standing in the middle of the road, the bicycle courier doing wheelie hops around pedestrians, and the gaggle of business men who were ignoring the light.

As I made the turn with success, a cop on foot madly began waving me over to the side of the road. What now?

"M'am, do you know what you did wrong?"
"Well officer, I apologise, I know I got a little close to those business men but the light was red and truthfully I was trying to avoid the old man and the cyclists."

He stared at me.

"So you didn't see the no right turn sign?"

He took my license and registration, and peered at it.
"From the country?"

"yes sir, and heading back that way now"

He stooped down and did a visual sweep of my station wagon. Poster depicting the different cow species, a Brooks and Dunn CD, and my rubber boots amuck with cow manure.

He handed me my license and registration.

And so I sped away back to the rural roads - where the only thing I have to worry about is the odd chance of a deer cutting me off.
Posted by Girl at 3:22 PM No comments:

I explained to my better half that I was in need of some poultry. He suggested I keep them way down in the barns and I laughed at this suggestion.

What I wanted was a coop.

He is a great builder of things, and I knew that with a little encouragement, and perhaps some homemade chocolate chip cookies and a beer, great things were possible.


And so it began! 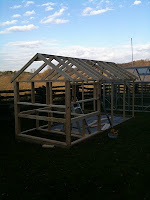 He started with the shell, and for a few days I began to worry that it would not get done in time before the snow fell.


But fear not...I came home from work to see progress being made. 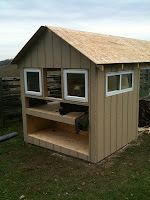 Gradually the coop was taking shape. The windows looked smashing, and I gave him top stars for the excellent ventilation and insulation. These would be spoilt chickens.

And here it is complete. There are two clean out doors, plenty of nest boxes, and nice large "man door" for me. He even hooked up electrical, albeit temporary for now.
Posted by Girl at 3:31 PM No comments: