Here we are at not even a year, and we have already ventured into equines....sort of. The donkey's have arrived. Yes, that's plural.  There goes my spring wardrobe fund!

We drove out to see the young female donkey, and upon arrival and inspection we discovered she was "less than perfect".  As a young foal she was kicked by a goat, and her left eye is "crooked".  It did nothing to hamper her cuteness, and we were hooked. So onto the trailer she went. I make that sound so simple. In real life it took several tries, a lot of encouragement, some pushing, and pleading. Donkey's we discovered, do not like to be told what to do.

Back on the road we went, albeit a little late, to go and see the second donkey. En route, we discussed the pros and cons of keeping a Jack.  Jacks have a terrible reputation, which you can read about here in the Jack files, and I was a little hesitant about keeping one.  But this young fellow was currently being socialized by four young girls. Surely I could handle him as well?

My dear sweet fireman pointed out that I handle our bull just fine, and that we would simply have to follow the same rules of respect with a mature Jack.

The discussion kept my mind off the snowy icy roads, which was a good thing. I am sure that there were several points on the journey which would have convinced a novice road tripper to turn back.

But we had an appointment and so we carried on.  We arrived three hours late, to meet the most endearing Jack. He was so docile, and led well. The girls fawned over him, and he accepted their fussing without the slightest of worry. We were hooked once more.

Getting him onto the trailer was a far simpler task, with the help of the girls and the encouragement of the Jenny he loaded quite quickly.

Once home, getting them off the trailer and into the barn was another feat, but somehow we managed. With some treats and encouragement, we lured them into the barn.

It's only been a day now, but it's amazing how they have already come to know which of my pockets the treats are in. We have called the Jenny "Clover", and have renamed the Jack "Radar".  Clover ran from me for most of the morning, but this evening she actually ran up to me - delighted to see the treat lady!

And so our equine adventure begins! 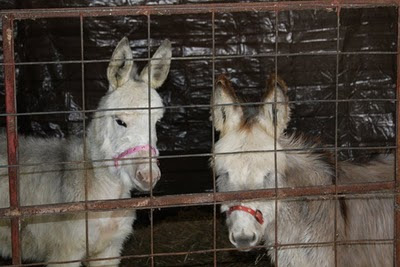