Well, it's official.  After months of talking about it, and weeks of planning - the sheep have arrived. We were not quite ready, in fact we still have to finish fencing in the pasture, but thus far they haven't attempted to escape.

It has been interesting to understand the ways of sheep.  They are quite a skittish bunch. If I walk up to the herd, they tend to walk the other way. This is extremely helpful when bringing them in at night, but doesn't soothe the urge I get to dig my hands into their woolly coats and give them a big old fashioned bear hug.

Of our four donkeys, Whisky and Lucy are best with the sheep.  Clover and Radar have been very naughty, and spent hours chasing the sheep during the first two days.  The combination of the hot September sunshine and the thick woolly coats was not conducive to running laps around the pasture, so Clover and Radar have been relocated to the centre courtyard. They are not happy about this, and have made their displeasure known by loudly braying and complaining.  Each night when we bring the sheep in, we bring the donkey's in as well and house them all side by side. We are hoping that with time Clover and Radar learn to accept the sheep.

I am still not used to their droppings.  After months of scooping donkey poop, the wee tiny pellets produced by the sheep led me to believe we had been infiltrated by rabbits! Tiny.  Extremely tiny. So tiny that my manure fork can't pick them up. I have resorted to sweeping the concrete. Which works...kind of.

I have suggested to the better half that a giant shop vac would do a fine job. He gave me "the look".   I didn't understand what was so odd about vacuuming the concrete paddock area. Now if I decide to pull out the Swiffer, then I would understand the concern,. 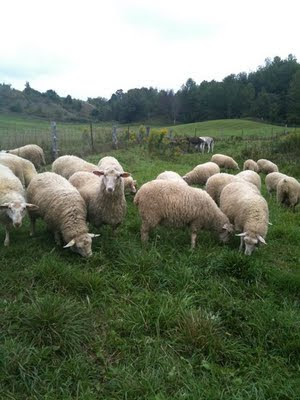