Well life never goes as expected does it? The day started normally enough. We had decided to go pick up hay, and so we packed some goodies and a water bottle and set off north.

I recall feeling a bit queer, but I chalked it up to the bouncing of the pickup.

We stopped on route at the Timmies and I got a muffin and a tea. Thinking back, I wasn't hungry for the muffin - unusual for a pregnant woman.

We arrived at the farm to pick up the hay, and it was then I began to feel nauseous. I chalked it up to a long car ride and pregnancy. I got out of the truck and the cool air was refreshing. However I couldn't shake the nausea. Loaded up and ready to head for home, I knew something was wrong.

The return trip was awful, and about halfway home I called the midwife. I was explaining how I felt, when I realized I was going to be sick. Handing the phone to my better half I then proceeded to throw up all over his truck. (poor man!)

She asked us to come to emergency. For the remainder of the trip, I focused on not passing out. I had the chills, nausea and was burning up. This was not just pregnancy!

Upon arrival at the hospital, they whisked me off to obstetrics - where a decision was made to do a c-section. My fever was 39.2 and the baby was showing distress.

Just like that I was on my way to meet my son!!

It all went well, and it was determined that the flu was the culprit for my illness. Baby and I are now recovering in hospital for a few more days.

He was 3 weeks early but perfect in every way.

He was worth every minute of feeling like crap :)

Welcome wee one! First baby of the year! 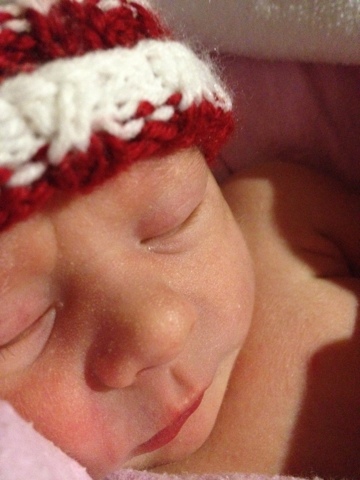