AIt usually becomes most apparent when I am at a cocktail party, although several times over the last year it has cropped up during meetings when we enter into idle chit chat to pass time while the smokers go outside to get their nicotine fix.
Typically, it starts with a simple question.
"Did you see Dexter last night? It was an awesome episode".
I usually smile, my very best Mona Lisa smile, and say "We don't have cable".
To which they typically reply "Oh! You have an antenna?" At this point, they are unable to wrap their brain around the idea that someone would choose not to watch television.
"No, we don't have cable. I don't watch TV. We have an internet connection only"
Now, what follows after this exchange varies. Sometimes it's "you're kidding right?" or most recently "Are you Amish?". But it is always the same air of disbelief and shock that we don't have a television hookup in our home.
Now don't get me wrong, we have a TV. It is a huge outdated Sony, with picture on picture. We also have a DVD player, and we have spent many cozy winter Saturday nights curled up in the basement rec room watching a great movie.
But when the movie is over, we turn off the tv and leave the basement to go back to the living.
My second favorite moment is when their mind begins to register the fact that we don't watch television, and I can always see the question coming.
"So what do you DO?????"
I love this question. What do I do. What do I do with all of the glorious hours of freedom that my life inherited the day I turned off the tv for good. The better question is "What don't I do?"
I read. I blog. I write. I spend time outside playing with my child. I read books to him. In the last year I have finished two children's books and half of a novel. (Any publishers' out there?) I bake. I cook up marvellous creations that I used to drool over in culinary magazines. I am learning to snowboard. I hike. I snowshoe. I went tobogganing last winter for the first time in years. I have dinner parties. I go out and visit friends. I fix things around the house. I clean. I organize. I sort and send things off to be Freecycled. I make greeting cards, and have begun painting again. I pintrest and twitter and enjoy connecting on social media. And of course...there is a farm to run and a day job that keeps me busy.
I LIVE.
That's it really. I no longer sit and watch other people living their lives. I get out there and write my own life story. Chapter by chapter, I try to create as many adventures as I can.
I can only hope that our children learn to balance technology with living, and always put living first.
There then comes the moment when they say "but you have a child! Doesn't he need television?"
No. He doesn't. In fact, when we do allow him to watch a program on the iPad it scares me to see the zombie like expression his face takes on. How he zones out - and can't hear me calling his name.
He is only just a year and a half old. He doesn't need television. He needs rocks and a bucket to put them in. A stick that becomes a pony to prance around on. Forts made out of pillows. Drums comprised of kitchen pots.
So we use the iPad only infrequently. And since he doesn't know any differently - he simply doesn't miss it.
Whenever I think "can he grow up without TV?" I remind myself that children all over the world do it everyday.
Besides - my son will be too busy doing chores and helping in the barn to have time. :) 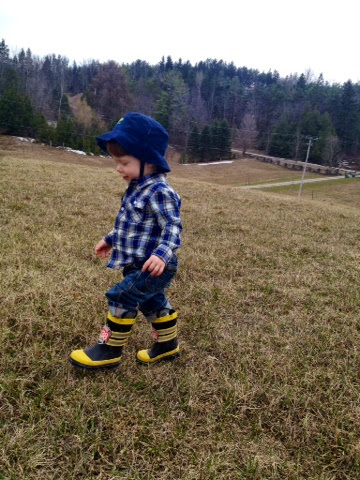 Email ThisBlogThis!Share to TwitterShare to FacebookShare to Pinterest
Labels: no cable, story of stuff, TV