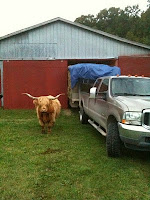 Time for some truth telling. I didn't know the difference between straw and hay. I thought they were one and the same thing. When other farmers asked me at farm auctions what we grew in our fields, I said "Hay". But I thought it was all the same thing.

Recently, I learnt that there is a large difference. Hay is a mix of grasses and plants, dried for use over the winter period to feed pasture fed animals.

Straw is the stalk of a plant, left over once the grains have been harvested, and is used primarily for bedding.

Our hay is a lovely mix of Timothy grass, alfalfa, brome and cowslip. It's also got quite a good bit of clover mized in, and makes a sweet smelling dried hay once it's all baled and in the barn.

We are still trying to calculate how much hay you actually need per cow. We have square bales, but want to do round bales next year.

So - how much had does a cow eat per month? In square bales? I have heard differing opinions, and my greatest fear is that in the middle of a cold and snowy winter we are going to run out of hay.

For now, they are happily munching away at the remaining grasses. We worry about that too, as we are allowing them to pasture in our hay fields. Will it cause damage to the plants? Should we move them before winter sets in?