He is a wee bit portly. In fact, the roll of fat along his neck has to go, or he will start to founder. But he is such a sweetie that I don't mind leading him about to give him a spot of exercise.

We have taken in an older gelding. He is about 6 years old, and his feet require attention - along with his waistline.  His previous owners fed him a diet high in pasture grasses and alfalfa...not ideal for donkeys. That's sort of like you and I eating a diet high in sugar.  It tends to cause waistline expansion!

The first few days he ran from us whenever we entered his stall area. He was terrified of the pitchfork, which leads us to wonder if it has been used to correct him in the past. We simply kept on entering his stall and established a routine. Working quietly and moving slowly so that he could get used to us.  We put him in with our Jack and the two of them get along like a house on fire. (No wonder, our Jack was so lonely he was happy to pen up with anyone!)  And the new fellow began to watch our Jack, nuzzling us for affection - and checking our pockets to see if we had apple slices or carrots.

We have named him Dobby. I whispered to him today "not to worry Dobby, I have a few pounds to lose as well. We shall both shape up by spring". 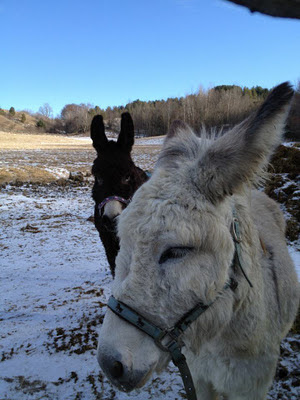 That's Dobby peeking out from behind Radar
Posted by Girl at 7:23 PM